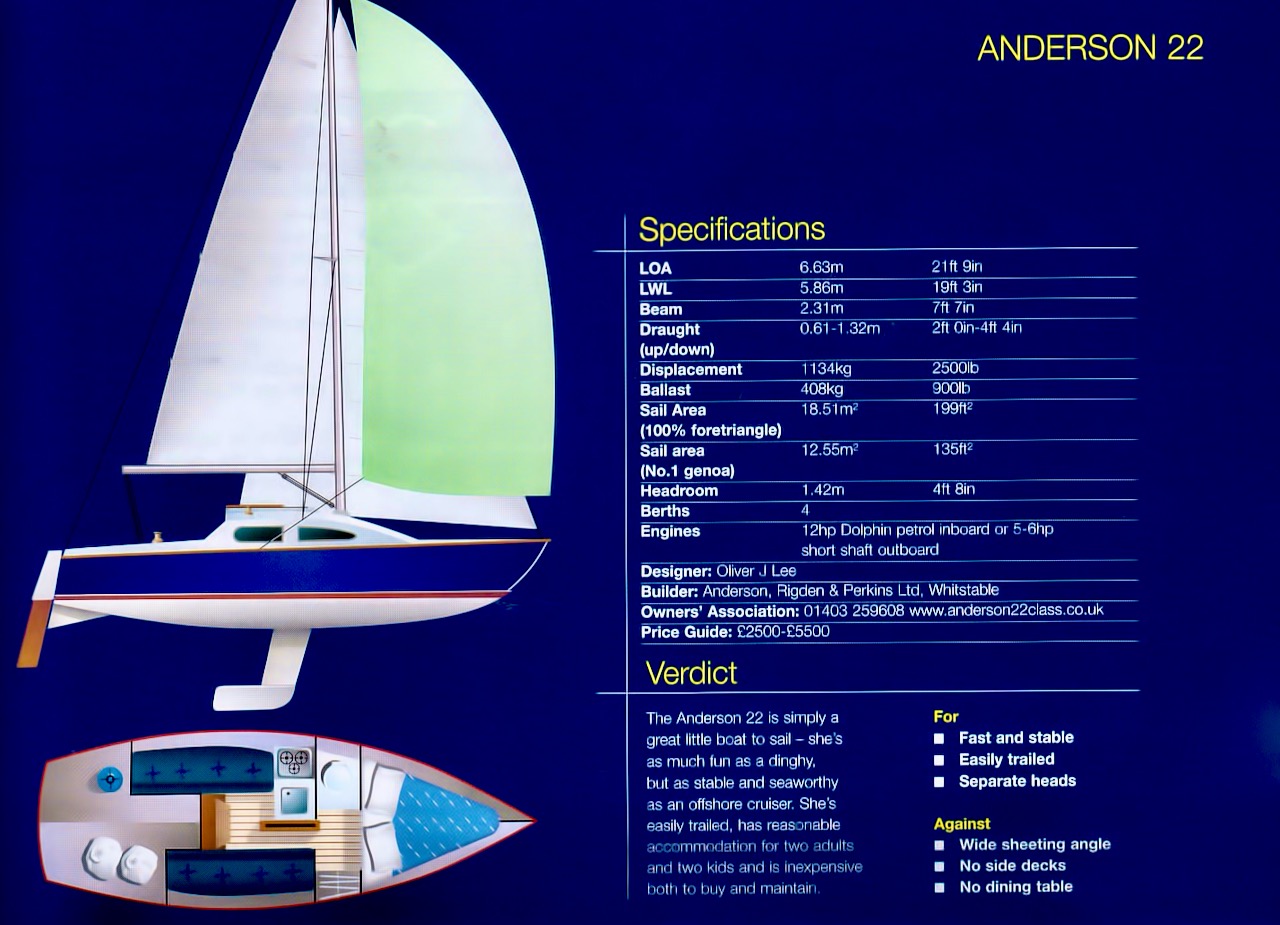 The Anderson 22 was designed in 1973 by Oliver Lee of Burnham, who had already made a name for himself with the early Hunter range including the Squib, 19 /Europa and 701.

Anderson Rigden & Perkins were established at Whitstable in 1917 and had a good reputation building wooden fishing and work boats – some quite large – and racing yachts.

By the 1970’s they were building grp launches and motor boats for the MOD, even now when you see an RN warship go by those are probably Anderson products on the side.

The Anderson 22 was an immediate success, and eventually sold about 180 before Andersons lost the MOD contract in 1982 – like boatyards all around the country they quickly folded.

A few points which make the Anderson 22 such a good format;

Easily driven hull, Oliver Lee always designed beautiful hull shapes, from underneath in the hoist she reminds me of a killer whale.

Moderate efficient rig, she is no overcanvassed dragster but delivers high speeds and good passage times while being easily handled, three have raced across the Atlantic.

She is tremendously seaworthy and keeps going into heavy weather when others would be stopped – my boat once beat a Rival 34 to windward in a solid Force 6+ ( in the Solent ), the Rivals’ owner was an ex National Champion dinghy racer and was amazed ( a little unhappy too ) – he commented the Hurley 22 he’d had would have stopped dead in those conditions.

Bob Salmon who raced the works entry ‘ Anderson Affair ‘ in the first Mini-Transat kept going into a Force 10 offshore.

In more normal sailing, she has good accommodation for 22’.

The outboard in a well is the best compromise for this size boat.

An inboard would be heavy and expensive, lose valuable stowage space and lose the very useful ability to raise the engine to clear any weed, rope etc – if the outboard engine is in at all.

The whole philosophy of the A22 is as soon as in clear water one stows the engine – usually in the port cockpit locker – and fits the fairing plug.

This restores silence from the engine and turbulence and a smooth drag free bottom so a boost in speed of well over a knot.

And the engine isn’t dangling to collect weed and flotsam.

A few later Andersons were fitted with various inboard engines if the customer wished but it doesn’t really suit the boat.

The outboard engine should be light enough to lift ( the actual process of getting the engine in and out of the well is very easy once one gets the knack, this is described in the ‘ top tips ‘ I supply to association members.

A well maintained Mariner 5hp TWO STROKE is the ideal engine, as four strokes are incredibly heavy – a remote tank definitely and charging coil if possible – good examples of these engines are still easily available.

A point worth noting, as the well is slightly to port and the engine stows in the port locker it is possible to fit or stow the engine without disturbing an autopilot, which usually goes on the starboard side of the tiller.

2 Replies to “Guide for buyers”